In March 2020, we saw a massive shift in consumer behavior triggered by the pandemic and related lockdowns. Home comforts, from streaming services to home-delivered luxuries such as craft gin, saw a massive increase in demand. However, as we enter 2023, we are witnessing a sharp reversal in these trends as contagion fears continue to dissipate and consumers begin to feel the full impact of the spiraling cost of living.

Late last year, Netflix launched a clampdown on the sharing of passwords in a frantic bid to boost profitability in the face of falling subscriber numbers. The company has also canceled some of its highest-profile shows due to low viewer completion rates – the metric it considers most likely to prompt resubscriptions. Consequently, while home entertainment is clearly a cheaper option than going out, premium streaming services could suffer until central bankers get a firm grip on inflation.

In our view, this creates an even bigger opportunity for ‘freemium’ providers, such as Epic Games. Epic is the creator, distributor, and the engine powering many of the most successful and popular 3D games globally, including Fortnite, Infinity Blade, and Gears of War. It flipped the business model of its competitors on its head; instead of selling a console at a cost and profiting from game sales, Epic made the games free and upsold from within – a prime example of a freemium model.

Although pandemic-related trends are fading, the shift to virtual engagement remains firmly entrenched. ‘Alone together’ – physically disconnected yet socially mobile is the new normal, and it is a much cheaper option than meeting in a bar. As such, online socializing through gaming activity via the 3D metaverse is set to expand further, providing growing incremental revenues to the most successful industry participants.

Beyond inflation - the fluid consumer

Consumers increasingly value time-savings and are now clearly differentiating between wants and needs. This leads to increased fluidity, subtle shifts in spending patterns, and hybrid shopping tendencies, encompassing both online and in-store experiences.

Today’s consumer is unconstrained by convention, and with behavior constantly changing at a faster rate than ever before, the consumer industry can no longer rely on anecdotal evidence to identify opportunities. Instead, businesses must adapt to offer a new range of options, experiences, and conveniences or face the prospect of failure.

Consequently, where ‘consumer tech’ was once taken as referring to software, hardware, or online offerings, it will, in the future, relate more to the necessity of utilizing data in the formulation of business models and the identification of target customer groups.

This is a seismic shift with the potential to wipe out industry giants who are unable or unwilling to move with the times. In the modern consumer industry, there is no such concept as ‘too big to fail’. In this respect, it is worth making a comparison with Netscape in the 1990s. As the first company to monetize the worldwide web, Netscape was at the cutting edge of the technology revolution, enjoying a 90% share of the browser market and a market capitalization of $3 billion. By 1997, Netscape’s profits turned to losses as other companies entered the market offering free browser services funded from advertising. This is a particularly salient example of a straightforward idea causing a major industry shake up and we see similar opportunities for innovative companies to grow rapidly in the era of the fluid customer.

The ongoing digitalization of the healthcare sector

Healthcare is obviously a huge industry, and by the very nature of its services, it is not exactly renowned for being nimble and innovative. However, the complexion is changing rapidly, and adapting to the digital era requires a complete adjustment in attitude towards a flexible and risk-taking mindset and trust in the concept that industry disruption will create huge opportunities.

A recent article published by Andreessen Horowitz suggests that the future biggest company in the world could well be a consumer health tech company. The authors point out that US healthcare is a $4 trillion industry (and growing), and the likes of Google, Apple, Facebook, and Amazon are all looking to grab a share of the market in recognition of its sheer potential.

Since the growth potential is exponential, we believe that the prospective disruptors of the US pharmaceutical industry do not necessarily need the financial muscle of Google and Amazon, but a proprietary digital platform is a prerequisite. This will easily allow for the vertical and horizontal integration of value-added services, enabling a company to rapidly scale up and become a holistic healthcare services provider.

We have identified two innovative companies operating in the digital healthcare arena that we believe have tremendous potential to make a profound impact in the coming years.

Alto Pharmacy was launched in 2015 by two MIT graduates and former Facebook engineers. The founders swiftly determined that, due to the fragmentation of the US healthcare industry, the market was lacking a customer-centric holistic provider capable of aligning the interests of provider, payor, and consumer. Consequently, they started to build a tech platform that automates all the backend work and simplifies the process for all involved. The result was the creation of the only ‘next generation’ pharmacy tech infrastructure, with in-house systems facilitating prescription processing from doctor to delivery.

With its B2B2C sales approach, Alto offers its proprietary software to doctors free of charge, lowering the administrative burden on practitioners in exchange for patient recommendations. Patients are onboarded in coordination with their insurers, allowing them to receive the most affordable treatment and coverage. All prescription data feeds into Alto's centralized system to provide same-day delivery and holistic 24/7 customer service for involved parties.

Having gained a strong foothold in its initial target market, Alto is now looking to tap into larger segments, thus enhancing its growth potential by significantly increasing the size of its total addressable market (TAM). 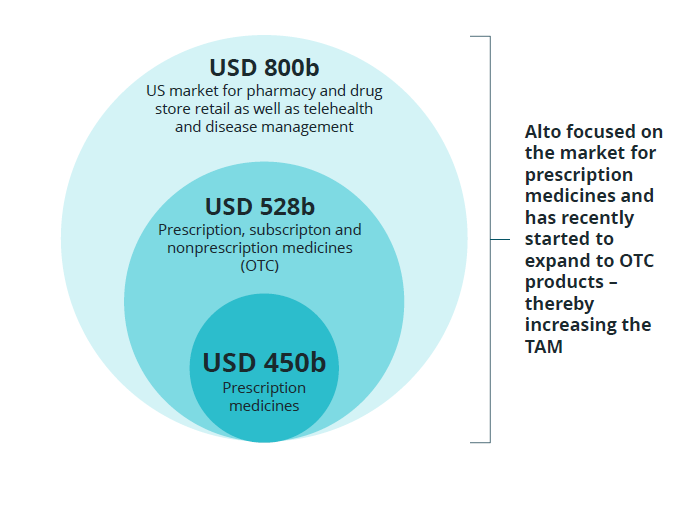 Wellness and health awareness is a huge consumer theme globally. For example, according to Data Bridge Market Research, the global meditation market is expected to grow at a compound annual growth rate (CAGR) of 18.5% in the seven-year period ending 2029.

Similarly, ‘FemTech’ is also growing rapidly and has been described in the media as a ‘sleeping giant’. The term ‘FemTech’ was first coined in 2016 and has rapidly expanded to encompass a broad range of technology-enabled, consumer-centric products and solutions aimed at the female wellness market.

Interestingly, Bellabeat pre-dates the naming of the subsector in which it is a leading player. Back in 2013, the firm launched its all-in-one, holistic tracking app. Their product was differentiated from those of its peer group in two distinct ways. Firstly, Bellabeat devices are beautifully designed to give the appearance of fashion accessories. Secondly, the devices enable the user to plan their wellness routines and diet in line with their hormonal cycle. As such, the app can recommend the best times to exercise and identify days in which extra self-care and mindfulness could prove especially beneficial.

Bellabeat is essentially a personalized wellness coach that does it all. By bundling all aspects of wellness into a single app, it simplifies the user experience and makes it easier for women to optimize their health and fitness. This is great news for women—but it also constitutes a compelling proposition for potential investors, given that women use wellness tech more actively than men and are typically more willing to pay for such services.

The physical and digital convergence

As we have discussed, consumer preferences are evolving and changing at a faster pace than ever before. The challenges that the movers and shapers of tomorrow must overcome in order to prosper are multifold.

The most significant challenges and opportunities lie in bringing together data from both the digital and physical worlds, overcoming incomplete or inaccurate customer data, and unlocking digital intelligence using artificial Intelligence (AI) and machine learning (ML) to create truly effective business models. Solving these problems will enable enterprises to act on their data across multiple channels, measure the results and expand profit margins exponentially.

The Elusive Concept of Diversification

How "The Everything Bubble" has changed the rules of the game

‘The investor of today does not benefit from yesterday’s growth.’

How to Reach Us