RETURNING TO THE OLD-FASHIONED CONCEPT OF ABSOLUTE RISK-ADJUSTED RETURNS

Being the punching bag asset class when traditional markets rally

Anyone who has followed Alternative Investments over the years will have observed a curious pattern that spans economic cycles. As traditional markets rally, mainstream commentators tend to point out that stocks, bonds, gold, or crude oil, for example, are returning ‘more’ than the average Alternative Investment.

As markets turn south, the topic suddenly changes. Traditional stocks and bonds portfolios may have suffered a loss of 20 percent or more, yet many wealth management professionals tirelessly point out that equities fund x in their portfolio outperformed equity index y by three percentage points. Which still leaves an investor with a 17 percent capital loss on the investment! 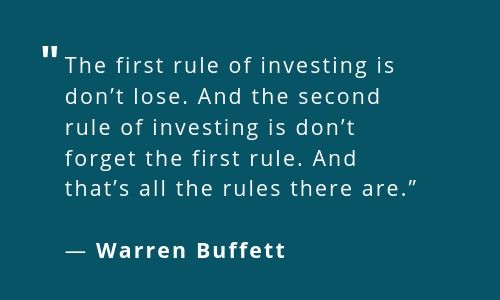 Non-professional investors tend to rationalize such losses by declaring themselves long-term investors. This article aims to explain why this thinking is flawed, why absolute returns matter, and why the amount of risk taken per amount of expected return fundamentally changes the way investors ought to think about their wealth.

Relative returns may be good for benchmarking, but not necessarily for our money

The majority of traditionally managed assets pursue so-called "relative return" strategies, which are measured against a benchmark index - e.g., the Swiss SMI or the US Dow Jones Index. 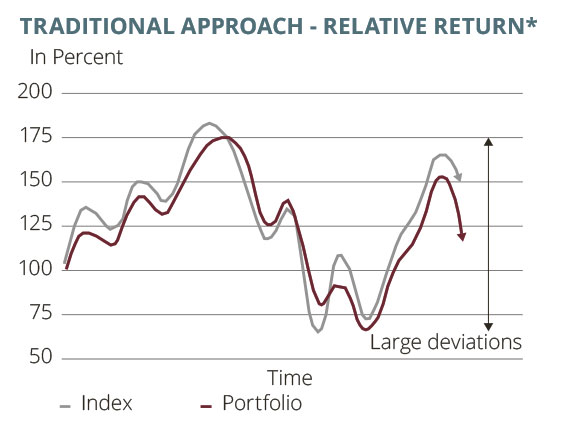 This concept became popular with the advent of mutual funds. The industry needed metrics to compare the various funds against each other and a benchmark. Unfortunately, this often does not square with our real-life needs. Not only is having 17% less wealth at a certain point in time painful because we may have planned to liquidate part of the gains to fund a child’s education or the purchase of a property. It also has consequences for the potential of (re-)building up wealth down the line

Another way to look at it: if one loses 50% of the value of one’s holdings in a crash, it will take a performance gain of 100% only to recoup the losses! This brings us back to the concept of declaring oneself a ‘long-term’ investor. Some of us will simply run out of time in the process.

This understanding of compounding is why the best professional investors will do everything in their power to not only prevent losses but to be particularly careful not to suffer them early.

Absolute, risk-adjusted returns are an old concept Alternative investments don’t benchmark against an index but as outperformance against the so-called risk-free rate, i.e., the return one would get from investing, for example into the London Interbank Rate (LIBOR). A Private Equity investor, for instance, cares about how many times the total of their contributions during the investment phase have multiplied after the proceeds have been distributed. Hence the term “multiple” or TVPI (which is Private Equity speak for Total Value vs. Paid In). A Hedge Fund investor cares about risk-adjusted absolute returns in the medium term. The focus is on “risk-adjusted” and “medium term.” Why? Because the amount of risk taken per unit of return matters. Anyone can have a lucky day risking their clients’ (and occasionally their own) money. Having luck persistently (hence “medium-term”) is much less likely. The concept of weighing the risks for every activity where we expect some return is not only an old concept but also one we employ in any other domain of our lives. Why not in investing? Stableton’s approach to Alternative Investments The proper implementation of an absolute return strategy does not only entail a significantly lower risk of a significant capital loss - as there is no rigid link to a benchmark - but also usually considerably more calculable investment results. This is why the Alternative Investment strategies we cover all subscribe to the concept of absolute returns.

THE CASE FOR VENTURE INVESTING

THE CASE FOR VOLATILITY & TAIL-HEDGE

Unique Access to Venture Investments. With the Simplicity of a Swiss Isin.

All-Weather Returns Across. All Asset Classes.

Disclaimer: The above article is for educational purposes only and does neither constitue investment advice nor shoul it be considered to be an invitation or recommendation to buy securities or any other investment products. Please consult your financial advisor about the risks and opoortunities prior to making investment decisions.